The causes of the lymphedema must be clearly identified. The type of tumours, the places of adenectomy and radiotherapy and the scars have to be examined. Then, we have to understand where the oedema began and after what kind of trauma.

The imaging is extremely important. The isotopic lymphangioscintigraphy can show the remaining lymph nodes and the uptake, but the informations obtained by lymph MRI are much more clear. They are showing the absence of connections of vessels and nodes, but also the remaining pathways witch can be used.

In case of bilateral lymphedema, information on the remaining pathways is necessary.

Good preoperative physiotherapy must be performed to reduce the tension of the lymphedema as much as possible.

The place to insert the flap has to be decided in regard to the scars and preoperative examination results.
The recipient site has to be opened first and evaluated.
The scar tissue has to be removed as much as possible, and the recipient vessels must be identified.

The place to insert the flap has to be precisely decided depending on the cause of the lymphedema:

Then, the donor sites must be chosen.
Generally, the thoracic flap is more often chosen, then the cervical flap and in very rare cases the upper inguinal heterolateral flap. 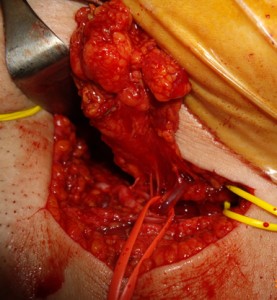 3,4 branches irrigating the thoracic nodes, are coming from the distal part of the thoracodorsal artery, just under the muscular branch to the dorsalis muscle

The incision is performed on a longitudinal line anterior to the latissimus muscle, lateral to the breast.
The superficial fascia is opened and the thoracodorsal vessels are dissected around the branch supplying the latissimus muscle.
A freestyle flap is designed in this region by dissecting the subscapular vessels and 4-5 nodes.
In 60% of cases, branches from the external mammary vessels supply the nodes in the superior portion of the flap.
If the caliber of the blood vessels is adequate for microanastomosis, the flap will be based on the branches of the external mammary vessels so that the thoracodorsal branches are left intact.
In the remaining 40% of cases, the flap is dissected based on the distal subscapular branches of the thoracodorsal vessels.
The nodes surrounding the axillary vein must remain untouched to avoid raising a flap that destroys the drainage of the arm.
This flap is generally used to treat lower legs edema and will be placed in the more fibrotic area, in the deep inguinal space. 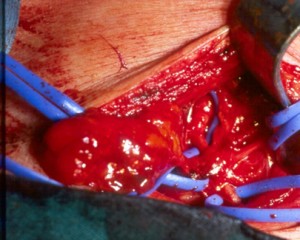 The incision is made in front of the clavicle, up the sternocleidomastoid, which is retracted.
Nodes are chosen based upon branches of the transverse cervical artery.
This flap contains some nodes on the pedicle and the veins are inferior, depending on the external jugular vein. It will be interesting except in very thin patients.
The flap is elevated and the vessels will be reconnected under microscope with 10X0 nylon (100micron ).

Mission: To advocate and advance new treatments for curing lymphedema and making these therapies available to patients in need.
http://www.corinnebeckerfoundation.org/